New Banana Pi SBCs are slim down for low-power IoT.

SinoVoip’s Banana Pi project has posted specs for its second development board based on SunPlus Technology’s SP7021 SoC after the Banana Pi BPI-F2S, which we covered back in November. The new Banana Pi BPI-F2P has a similar layout and feature list as the BPI-F2S. The biggest difference is the addition of two serial ports, as well as a new Power-over-Ethernet function on one of the two 10/100 Ethernet ports. Meanwhile, the FPGA connector for an optional Artix-7 FPGA module has been removed.

The Banana Pi project also revealed a Banana Pi BPI-EAI80 AIoT SBC that does not run Linux, but sort of looks like a board that would (see farther below). We found out about the SBCs from Geeky Gadgets, which has separate reports on the BPI-F2P and BPI-EAI80 AIoT. These link to announcements on Hackter.io here and here. Although the BPI-F2P and BPI-F2S appear to be backed by the Banana Pi community, there is no indication these are open source hardware boards like most Banana Pi SBCs. Schematics have yet to be posted for the BPI-F2, which is now selling for $58 at AliExpress.

The SP7021 (Plus1) SoC was developed by SunPlus and Tibbo Technology for IoTR and industrial control applications. The SoC has 4x 1GHz Cortex-A7 cores pus an 8051 microcontroller and an Arm9 CPU used as a real-time core. The SunPlus SP7021 further integrates a secure boot chip, an RTC, a 3.3V PMIC128MB or 512MB DDR3-1066. (For more details on the SP7021, please see our BPI-F2S report.) 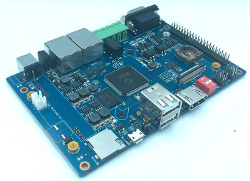 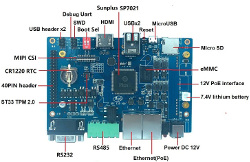 Like the BPI-F2S, the BPI-F2P gets by on the SP7021 SoC’s half gig of RAM and adds 8GB eMMC, a microSD slot, and the dual Fast Ethernet ports. The project does not list the type of PoE support used by one of the two ports.

Other similar features include 2x USB 2.0, single micro-USB and HDMI 1.4 ports, and MIPI-CSI and 40-pin GPIO connectors. The board is similarly equipped with a TPM 2.0 security chip, a boot select switch, and ICE and serial console debug connectors. The 12V DC input is accompanied by a reset switch, but the JTAG interface has been removed.

Images are available for Ubuntu Mate 18.04, Kali Linux, CentOS, Fedora-Mate, and Mozilla’s IoT Gateway, all with Linux kernel 4.19.37. Debian 10 is available with kernel 4.19. SunPlus and Tibbo also maintain a Yocto stack on GitHub.

We usually don’t cover non-Linux boards, but we are intrigued by the growing number of high-end MCU SBCs that can perform many of the functions of low-end Cortex-A based boards. The Banana Pi BPI-EAI80 AIoT is built around China-based Edgeless Semiconductor’s crossover AI MCU series, in this case the Edgeless EAI80. There’s no website yet, but earlier this month CNXSoft reported on the SoC and briefly mention the upcoming Banana Pi board based on the project, which is now named the BPI-EAI80 AIoT. 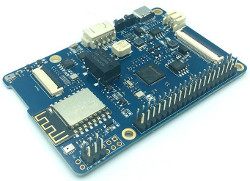 The Edgeless EAI80 comprises dual Cortex-M4F cores at up to 200Mhz, along with DSP instructions, I/D cache, crypto features, and 2D graphics support. One of the cores offloads the other to perform complicated mathematical calculations. The SoC-like MCU also integrates a 300MHz CNN NPU with 300 GOPS AI performance — that’s giga operations per second instead of TOPS’ tera. The NPU can handle image detection and recognition and supports CNN models such as Resnet-18, Resnet-34, Vgg16, GoogleNet, and Lenet.

The 86 x 54mm BPI-EAI80 AIoT board adds 8MB SDRAM and an Espressif ESP8266 WiFi chipset, the forerunner of the later ESP8285 and ESP32. The SBC has an LCD interface for up to 1024 x 768 resolution plus a camera connector with dual camera support. There is also a USB 2.0 Type-C port, a CANBus 2.0 A/B interface, 40-pin GPIO, and dual mic support, among other features shown on the detail view above.

The EAI80 is one of the lower-end of five models up to an EAI98, which appear to differ mostly in terms of the number of interfaces such as ADC and GPIO. The EAI Series supports RTOSes such as Edgeless’ Free E-RTOS, as well as FreeRTOS, Mbed, and Zephyr.

How do I connect to a dedicated server using Jenkins?